During the simulation, students find multiple opportunities to refine and enhance specific skills and capabilities: leadership, analytical and critical thinking, public speaking and oral debate, small group cooperation and consensus building – all of which are keys to success in today’s professional world. Moreover, we hope the MEUSC students will garner greater cultural sensitivity, global awareness, and international sophistication, ultimately shaping their academic and professional lives for years to come.

Strive to achieve these goals as you proceed with your negotiations, and enjoy sharing with your colleagues the outstanding benefits of experiential learning. Best of luck during this educational adventure!

The 2016 MEUS focused on the migration crisis and “Brexit.”  The EU Commission first drafted a legislative proposal and issued its recommendation to the Councils and to the Parliament.  Then, Members of the European Parliament as well as the Council of Ministers and the European Council debated the proposal. After several days of deliberation, the final legislation was formally adopted. A final version of the document can be found here: Final 2016 EU Directive on Immigration Issues and “Brexit.”

Detailed Program of the 2016 EU Simulation 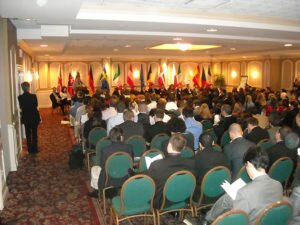 During the simulation, participants were involved in various stages of the legislative process and were briefed by the embassy staff of the country they represented.

Students are required to follow the formal procedures of the European Parliament. It’s not always easy for students to gain a full understanding and appreciation of these rules, but they soon realize the importance of how rules can structure and determine outcomes. They also learn the importance of leadership styles as the committees work toward resolving their differing stands on the legislative proposal.